Schedule of weighing and lifts will be made based on preliminary applications and will be available from October 09, 2018 on the official website of the federation: https://streetlifting.ru/eurochamp2018, and on the Facebook – https://www.facebook.com/streetlifting.

Championship will be held on the ISF Technical Rules. Read them in English on website: https://streetlifting.ru/en/rules/.

The athletes pay the entrance fee at the time of the weigh-in.

Athletes who did not submit a timely application before October 06, pay an entry fee and a fine of 1000 RUR / 16 USD on the spot while passing the registration during the weighing procedure.

To get a MSIC (Pro), MS (Advanced) and CMS (Intermediate) ranks by ISF special online form on official web site of federation needs to be sent: https://streetlifting.ru/en/sporting-title/.

It is also possible to arrange sports ranks at the tournament, after the awards ceremony. To do this you should have a photo a size of 3 to 4 centimeters and organizer of championship will give student’s normative-book classification athlete ISF. 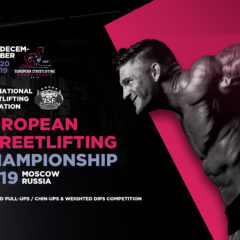